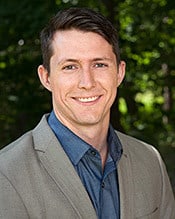 Robert Roche serves as OPG’s Marketing and Innovation Manager.
He is responsible for developing and executing the strategic
marketing plan for OPG. This effort is designed to expand OPG’s
reach to new organizations and markets that will benefit from our
unique consulting services. Robert began at OPG in February, 2016
as a Client Services Assistant, and has proudly grown with the
organization.

Robert slowly acquired his love and knowledge of marketing through on the job experience.
After serving as a staff and website manager for the Harvard University Aquatics department,
Robert worked in Human Resources for BestDoctors in Boston as a logistical planner
and social media manager. Upon moving to New Haven in the summer of 2015, he began
facilitating marketing events and managing social media for the Yale Law School Alumni office.

After starting at OPG in February of 2016 as a Client Services Assistant, Robert spearheaded
the company’s first formal social media campaigns to expand OPG’s network and help
acquire new leads. Over his tenure at OPG, Robert led several innovative initiatives such as
implementing a company-wide charrette to promote innovation and hosting the company
podcast, OPG Inspire. In his position, Robert is responsible for all downstream marketing and
innovation efforts based on the firms strategic marketing plan which he helped develop. In
this role, Robert is charged with building the OPG brand and expanding OPG’s reach to new
organizations.

Robert graduated from Boston University with a Bachelor’s degree in Economics. He is an avid
musician, swimmer, and Brazilian Jiu Jitsu enthusiast; he will never say no to an invitation to
see a band in concert.